What's in a Name?

So why is this blog called Clear Eyes?  I know some of you might be thinking that I meant to name my blog after the band Bright Eyes.  However, I am not a hipster.  If you don’t believe me take a look at my profile picture.  Do hipsters wear cashmere cable knit sweaters?  I don’t think so.
There are really two reasons why I named this blog Clear Eyes.  The first reason is because I am a television junkie.  I know, I know.  All the cool kids are online. But:
A.) I was never cool and
B.) I LOVE my stories.
While I will watch just about any genre of television show from daytime soaps (The Young and the Restless) to reality television (The Real Housewives of Whatever) or even sci-fi/fantasty (True Blood), my favorite genre is teen TV.  Maybe it’s because I watched too many episodes of Murder She Wrote and Matlock (ask your grandma) when I was growing up that I’m forced to relive my youth now.  Maybe it’s the shiny images networks like The CW give us on a weekly basis.  Maybe I find the stories, the representations of gender, race, class and sexuality, and all the synergynistic spin-off products fascinating.  Or maybe it’s a combination of all three. Regardless, I just can’t get enough of teen television.  And thanks to two amazing college professors I found a way to parlay my love of Dawson’s Creek into a master’s thesis, a book, and an academic career, which has deepened my love for the genre even more.
Which brings me back to one of the reasons why I named this blog Clear Eyes.  Although not completely situated in the teen TV genre, the NBC series Friday Night Lights (2006-2011) about a small town Texas football team captured my heart.  If I had started watching the series when it first premiered in the fall of 2006 instead of through a Bravo marathon in January 2007, my cats would have been named Lila and Landry.  If I hadn’t loved this show so much I wouldn’t have wasted a good 45 minutes with my BFF trying to find the perfect pair of Tammy Taylor sunglasses.  But I did fall in love with the show and in particular one of the values that Coach Eric Taylor tries to instill in his players, “Clear eyes, full hearts, can’t lose.”  Whenever Coach started the phrase and the rest of the players finished it before a big game, it was time to reach for the tissues.  The name of the blog is partly a homage to FNL and all the other shows that I couldn’t bear not to watch.
But there is another reason why I named this blog Clear Eyes and it’s not just after FNL.  I am a strong advocate of media literacy.  As many of my students have heard me say, I believe that we live in a toxic media culture. Therefore, in order to fully understand the images and stories media present to us as well as understand how they may affect our understanding of ourselves and the world around us, we need to embrace media literacy. Scholar Patricia Aufderheide (2001) suggests that there are five tenets of media literacy: (1) although media help shape our reality, they are not natural or inherent but are actually constructed texts that (2) have commercial interests and (3) ideological implications, as well as (4) unique forms and content that (5) viewers negotiate to make meaning.  I think Clear Eyes alludes to these five tenets and implies the importance of critically analyzing the world around us (including my beloved teen TV shows).
I guess there is one other reason that this blog is called Clear Eyes.  I Love Percy and Fidgi doesn’t sound that professional and Cats in Sweaters is a way better band name (duh). 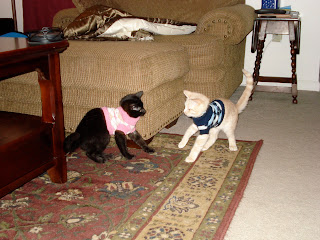 Lori Bindig
Lori Bindig is a media professor at Sacred Heart University who loves pop culture. And cats. In all seriousness, she earned her doctorate in Communication at the University of Massachusetts Amherst where she was awarded the title of University Fellow in 2004. Dr. Bindig holds a BA in American Studies, BFA in Musical Theatre, and MA in Communication from the University of Hartford along with an Advanced Graduate Certificate in Feminist Theory through the Department of Women’s Studies at UMass. Dr. Bindig’s areas of teaching include public relations, advertising, and media. Her research interests are critical cultural studies and media literacy particularly dealing with the construction and commodification of young femininity. Dr. Bindig has presented research at ECA, NCA, ICA, CSA, and UDC. She is the author of Dawson’s Creek: A Critical Understanding. Lexington Books is also publishing her second book, The OC: A Critical Understanding, which is co-authored with Andrea Bergstrom. Dr. Bindig also has an upcoming chapter on media literacy and eating disorder treatment in the third edition of Race/Gender/Media: Considering diversity across audiences, content and producers.